It fixes the following issues:

Issue 2
The Add-AppvClientPackage cmdlet fails if the URL for the package contains a space character.

Issue 4
Custom configurations are lost after you delete an Active Directory group from the APP-V server.

Issue 3 was a very widespread issue and even affected some of my customers. 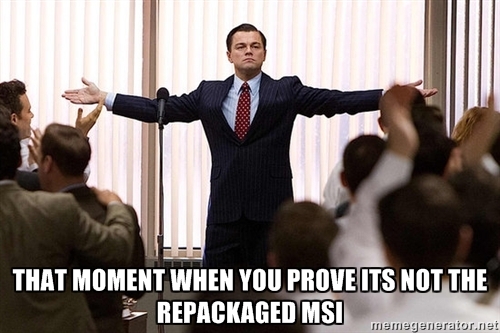 … triggers a repair of itself after/during  the installation. (Custom action) 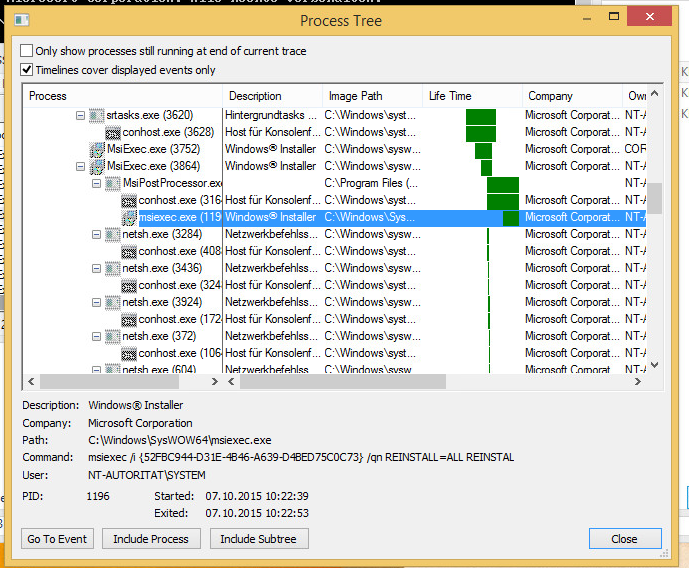 Ever wondered how to easily extract a Burn (WiX) based installer?

Of course you can track down all the setup resources with Procmon or Process Explorer and then copy everything in place.

However there is a much more elegant way using the WiX Toolset.

As an example this can be used to extract the App-V Client Setup and get all MSI’s and bundled pre-requisites out of it: 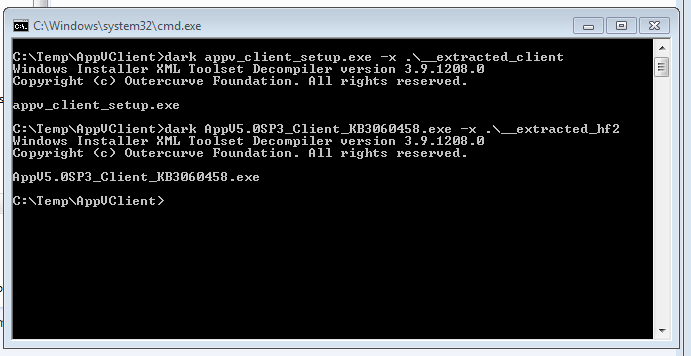 According to this presentation the release of AdminStudio 2015 should be right around the corner.

Ive already played around with the new powershell functionality in InstallShield 2015 which gives access to the current Windows Installer Session and so far it seems pretty cool.

A description of the “cmdlets” to interact with the current windows installer session can be found here.

However after following the official recipe from Microsoft, which is available here, a certain transaction always crashed in SAP GUI 7.4.

After digging around a bit with my 2nd favourite swiss army knife tool “procmon.exe” (1st place goes to “APIMonitor”) I spotted a buffer overflow while reading out the InProcServer32 of the “sapnetz.ocx” COM DLL. Im actually not yet sure if this was the root cause of the crash, however this led me to the decision to shorten the path to this DLL.

How? The recipe guides us to use “C:\Program Files (x86)\SAP” as “PVAD / Primary Installation directory”.  This PVAD or “Root” folder has physically the shortest path length of basically everything inside the App-V Package (Everything else is mapped using the VFS Structure).

My decision was to use a deeper definition of the PVAD Folder: C:\Program Files (x86)\SAP\FrontEnd.

This made the real physical path to “sapnetz.ocx” a bit shorter (less characters)  which may not explode the buffer which is reserved for that string.

And Yes… it seemed to work. “swdd” transaction does not crash any more.

So what else should you consider for “your” SAP GUI Package?

Had to create an overview for a customer, so here it is:

More stuff on the web:

But there is still no news whether App-V 4.6  will be officially supported on Windows 10 as mainstream support will end on 14th july (which probably means no further service packs for App-V 4.6 ).

At least it seems to work from technical viewpoint according to Tim Mangan from BrianMadden.com .